I've been meaning to write a Health Update (or several) since about February, but have been perpetually behind on blogging and documentation this entire year.  In a way, I guess the reason for that is part of the health update. So, I'm finally going to dive in and give it a try.

After I made the decision to close my sign-painting business, and we got through some home projects and the holidays, I spent December, January and February just trying to physically recover from the past two years of trauma.  I quite literally slept most of January and February.  Naps everyday, reading lots of books while laying on the couch, and disconnecting from everything else as much as possible.  No matter how much I rested, I was always tired and had little to no capacity for anything other than just getting through each day.  I remember having to give myself a huge pep talk while sitting in the Walmart parking lot, just to walk inside and do a quick grocery shopping trip.  I could hardly make myself get out of the car. 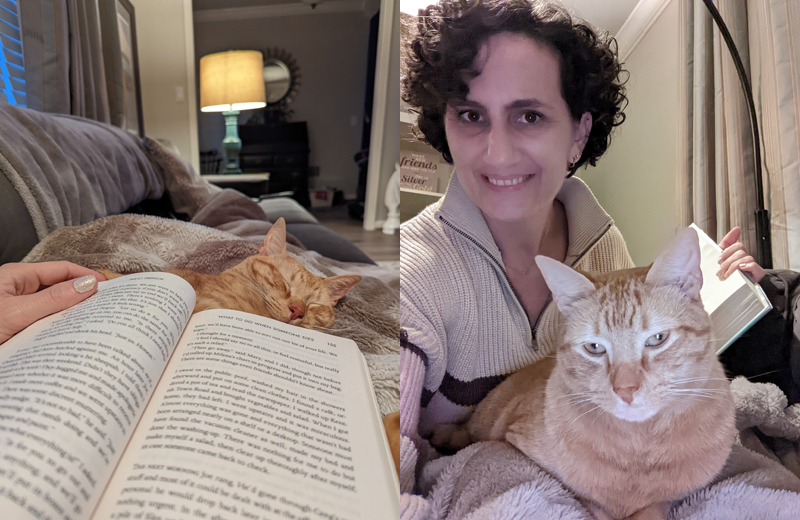 In February, I had an appointment with my oncologist, who after hearing about my steady decline in energy, suggested I stop taking Tamoxifen, the estrogen hormone blocking pill I'd been taking for the past year (and was scheduled to take for 5-10 years if it was tolerable).  While initially it didn't seem to have much side effect, as the year went on, I became more and more sluggish, had constipation stomach issues, and continued confusion and trouble focusing.  He said taking Tamoxifen was an "extra insurance policy" on what had already worked with chemo and surgery, and since my tumor was so mildly estrogen positive, he was 100% comfortable with me coming off of that medicine.

After about two weeks off of it, I noticed a big difference in my energy levels and finally started feeling a little more like my (albiet, older and a little beat up) self.  A few weeks after that, I also stopped taking a probiotic I'd been on for a long time which significantly improved my stomach issues.  Around March, I was down to taking only a daily multi-vitamin (1/2 dose), Claritin and 5mg of Methimazole for Graves Disease.  It felt very good to be reducing my daily meds.

Spring in my Step

As the spring went on, I had several fun social events, trips and activities on the calendar that I was able to rally my energy and enjoy. Some took a LOT of prep and recovery to devote energy to them, and some were restorative and restful.  I was intentional about not putting too much responsibility on my plate, to leave large blocks of time in the day and week empty for quiet, reading, and sleep.  I've continued to exercise at Burn or walk 3-5 days a week all year.  Some days I can do it all and have great energy.  Other days, I'm struggling to do the minimum modifications. I've continued to deal with moderate elbow issues, both with my original injury on my left elbow and a new golfer's elbow development on my right elbow.  I've been very thankful to be able to physically feel (mostly) good, feel like I *looked* good, and have the energy to enjoy all of those activities.  But don't be fooled.  In between each activity was a lot of laying on the couch, resting, and recovering. 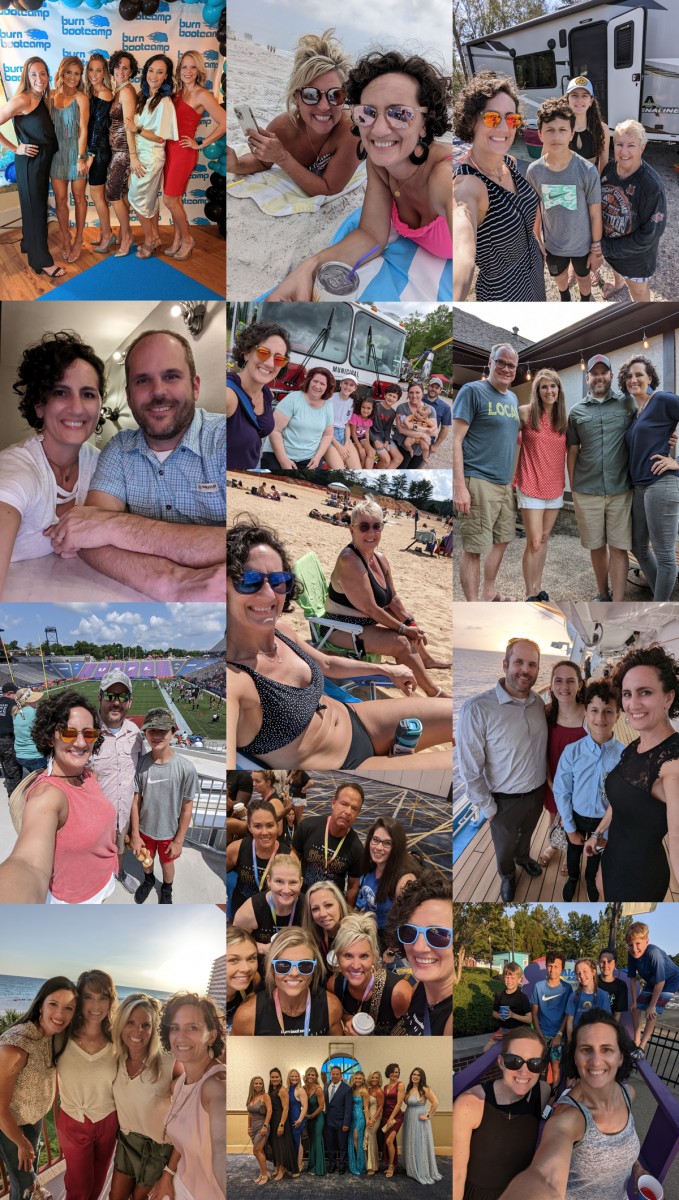 I have (finally) learned that I need to say NO more often in order to have enough energy to do the things I want to say YES to.  This spring, that has meant I don't spend as much time cleaning and straightening and planning and prepping, I'm not likely to volunteer for extra jobs or responsibilities, I'm not good at regularly checking in on friends and family, I aim to accomplish only one or two things a day, I don't do as good of a job of documenting, taking photos and blogging, and honestly, I look a lot lazier and disconnected than I once prided myself in being.  I've prioritized enjoyment and rest instead of productivity and dependability.  For now, that's what I've needed to do.

Mentally and spiritually, I have continued to struggle.  I'm not comfortable looking too far ahead into the future, making big plans, firm commitments, setting goals or having expectations.  Day-to-day and week-to-week is about all I can (and want) to manage. I'm easily overwhelmed when there is too much to think about at once, especially if the topic is complicated or includes drama.  I'm better at enjoying things in the moment, which is good, but I can tell that's because I'm only confident in the *right now*.  I fully expect any long term plan or expectation to fall apart for one reason or another, or for life to throw another curveball that derails the entire thing.  Instead of allowing myself to look down the road, I focus only on what is right in front of me, and the next step.  Consequently, I have no idea where I'm going, and I remain afraid to allow myself to head toward anything I might want or need in my life, for fear that it too will be taken away from me.

After ALL the things, if I'm being honest, I feel angry and defeated and worn out more than I feel thankful and hopeful.  While my instinct is to run away from God, church, and anything that gives up control over my own life, I have tried to heed the advice I was given early on in my breast cancer diagnosis:  "The Lord will fight for you.  You need only to be still."  So, although yes, I'm physically healthy, cancer-free, and everything looks "good" and "fine" on the outside, I'm still waiting to be healed on the inside and while it is slowly improving over time, I have a long way to go.

If you follow my personal accounts on Instagram or Facebook, you may have noticed my feed has all but stopped, which is atypical for me.  Around May, when I found myself very behind here on my personal blog, I decided I would not post on Instagram or Facebook until I was caught up, because the documentation of our family's life events is ultimately for me and my own family.  I wanted to prioritize that over sharing it immediately with everyone I'd ever met.

It took me until now (July) to catch up, and I found that in the meantime, I've really enjoyed the freedom of not having to immediately "wrap up" everything I did with a post of photos and writing and sharing in-the-moment stories of what is happening in my life.

For one, that practice has kept me more "in the moment" and interacting with the people I see in person and on a regular basis instead of communicating with such a wide variety of people on a constant basis.

Second, it allowed me to rest instead of "work" after each activity.  My job with Burn keeps me on Instagram and Facebook writing and creating graphics and answering comments and DMs all day, every day, so by the time I was done working, I didn't want to do the same thing with my own photos and life.

And most significantly, if I was posting about all the fun things, I felt like I was telling only half of the story.  That no one would understand that between each of the fun and pretty and active things were hard, slow, challenging days.  I was worried that (like we all do), people would make up the story in their heads that if I was out having fun and looking good, and traveling and spending time with friends and family, I must be "all better"-- and that still doesn't really feel true.

After sharing some pretty raw and real parts of my life over the past couple of years, I'm just tired, and I don't want to use my limited energy to talk about those things as much--but they're still there.  So I released myself of the responsibility to constantly tell that part of the story until I'm ready to tell it. And if those who are  interested are willing to be patient, I know that eventually, I'll be ready and will.  In fact, though this post is backdated to July, I'm not actually writing it until September 2022.  Today I felt ready.

End of an Era - Signs By Andrea

End of an Era - Signs By Andrea

Friends & Family - I post family updates a couple of times a week on the private portion of my blog.  If you can't see those posts, you can log in here.

Time for a Haircut

Curly Girl Method - Before and After